Each of the six branches of the United States Armed Forces — the Army, Navy, Air Force, Army National Guard, Marine Corps, and U.S. Coast Guard — have different recruiting criteria.  Moreover, each branch requires its applicants to undergo strict moral character standards and must meet federal regulations when it comes to accepting applicants with criminal records.

Moral character screening is the procedure by which military recruiters review applicant’s criminal backgrounds and credit.  The object of this screening process is to identify those individuals who may have disciplinary problems or who could harm the military’s mission.  In addition to initial screening mechanisms, such as performing criminal background checks, recruiters will also conduct interviews of applicants with criminal histories.

The moral character screening process is lengthy and comprehensive.  An applicant’s conviction(s) will be evaluated based on the nature and severity of the offense.  Moreover, applicants are required to disclose any incidents that resulted in an arrest or in charges being filed.

Any offense that resulted in a conviction or an “adverse adjudication” will count.  If charges were outright dismissed (without any diversionary program or conditions) or if they resulted in a finding of not guilty, they will not.  To determine whether an offense will count against you for purposes of enlistment, the military will be focused on whether or not you actually committed the offense, as opposed to whether or not you were actually convicted.  Those, those charges that were dismissed pursuant to a diversionary program (one where you were put on probation for a set amount of time, after which the charges were dismissed) will likely be counted against them.

Do I Have to Disclose an Expunged Criminal Record?

After expungement of your criminal record in New Jersey, the New Jersey expungement statutes state that “the arrest, conviction and any proceedings related thereto shall be deemed not to have occurred, and the petitioner may answer any questions relating to their occurrence accordingly.” See N.J.S.A. 2C:52-27.

There are, however, exceptions to this general rule in New Jersey.  While you would be under no legal obligation to disclose your expunged records to most employers – and these employers would not be able to see the expunged records – there are certain situations where this is not the case.  For example, N.J.S.A. 2C:52-27 goes on to state that expunged records in New Jersey must be revealed if the individual seeks employment within the judicial branch, with law enforcement, or with corrections.  In addition, even if your record has been expunged, you are still legally required to disclose the expunged offense if you are enlisting in the U.S. Military.

Once records are expunged in New Jersey, they are not physically destroyed.  Instead, they are “extracted and isolated.”  In short, this means that they are moved to a special location where they are no longer available to accessed by the general public.  Thus, the records will no longer be seen when a potential employer or other individual conducts a background check.  The U.S. Military, however, will still have access to your criminal records, even though they were expunged under New Jersey state law.

Thus, during the moral screening process, applicants must and should disclose any incidents that resulted in an arrest or in charges being filed — even for juvenile offenses or for offenses that were sealed or expunged. See 32 C.F.R. 571.3(c)(2)(i).  In fact, failure to disclose information or the providing of false information could qualify as a federal offenses.

Even if your expunged offense is not revealed during the recruiting criminal background check process for some reason, it will more than likely come up during a security clearance criminal background check.  If you are found to have withheld or falsified information during enlistment, you could be charged under federal law or Article 83 of the Uniform Code of Military Justice for fraudulent enlistment.  As a result you could be dishonorably discharged and lose all pay and allowances, in addition to facing up to two years of confinement.

What Effect Then, If Any, Will Expungement Have on Enlistment?

Even though you are still required to disclose expunged offenses and the U.S. Military will still be able to see expunged offenses on your record, expungement under state law can carry some weight when it comes to your eligibility for enlistment.

In general, Criminal Record Waivers are available for those who have been charged with minor traffic offenses, juvenile offenses, or misdemeanor charges.  Although it is possible to obtain a waiver with a felony conviction, these are some of the more difficult cases.

Whether or not you will be approved for a waiver will be determined on a case-by-case basis.  The military will require information concerning the “who, what, where, when and why” surrounding the offense.  In determining whether a waiver will be granted, the following factors may be taken into consideration:

Although evidence of expungement does not guarantee that you will be granted a waiver, it does nonetheless carry weight.  Expungement procedures are evidence of rehabilitation.  Thus, if your offense is eligible for expungement, it is strongly recommended that you have the record expunged.

If you have further questions about whether or not you can enlist in the military with an expunged record, contact the New Jersey expungement lawyers at Katherine O’Brien Law today.

Our all-inclusive expungement services start at just $695.  Call now for a free consultation. 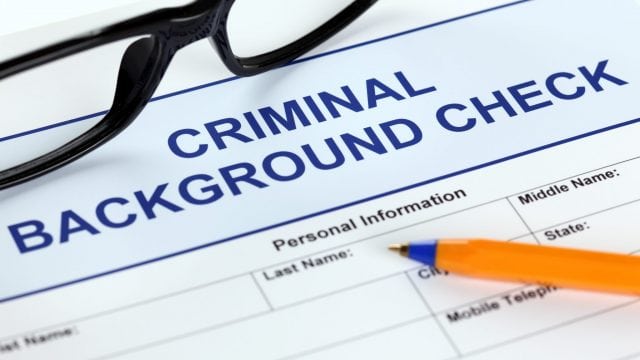 How to Correct a Mistake on Your New Jersey Criminal History